Ham turkey from a ham cooker is a juicy home-made meat, which I strongly encourage you to prepare. Since I bought my ham cooker, I’ve been eating practically only home-made cold cuts, nowadays I rarely buy ham in the store. I usually make poultry and pork meat in the ham cooker. When it comes to poultry, I mainly use chicken and turkey fillets, and in the case of pork, neck, shoulder and ham work well. You can season each of these meats with your favourite spices. For me, sweet and hot paprika, herbs such as garlic, rosemary, thyme, sun-dried tomatoes, parsley and onions taste the best.

The recipe for turkey ham from ham cooker, that you can find below is a simple recipe for homemade cold cuts. First, I season the meat with ground paprika, pepper and pickling salt and set it aside for several hours to marinate. Then, I add gelatine and water and put it on a small heat, the temperature all the time 80 degrees Celsius and over 2 hours. Gelatine is not a mandatory ingredient, but I like to add it because the meat releases water during cooking and when cold, a delicious jelly is created on the ham, which I love. Hope you guys try the below recipe for turkey ham from ham cooker.

How to make turkey ham from ham cooker.

Clean the turkey breast, cut the membranes and pat dry with a paper towel. In a bowl, combine sweet and hot paprika, pickling salt and herb pepper. Thoroughly rub the turkey breast with the spices from the bowl, then put it in a bag in which it will be cured. Wrap the bag and put it in the fridge for 20 hours.

Mix the gelatine with water and set it aside for 10 minutes. Next, take the turkey breast out of the fridge, coat it with bloomed gelatine, carefully close the bag and put it in the ham cooker. Close the ham cooker tightly, put it in the pot and pour water over it. Do not pour the water until the top, leave about 3-4 centimetres under the lid. Put the pot on the heat, bring it to a temperature of 80 degrees Celsius and, keeping this temperature, cook for 2 hours and 20 minutes. I have a thermometer in my pot all the time to be sure that the cooking temperature is exactly 80 degrees.

Good to know when making turkey ham from ham cooker.

The turkey breast I used to prepare the turkey ham was in one piece.

I use a press ham cooker. A ham cooker with a water jacket is a set that includes a container for meat with a maximum weight of 1.5 kg, and a narrow pot for water into which this container should be inserted. As I mentioned above, I do not completely fill up the container, I leave a few centimetres under the top.

Gelatine with water can also be added when you rub the meat with spices.

Do you like homemade cold cuts from turkey? If so, try our recipe for Turkey pate with apricot. 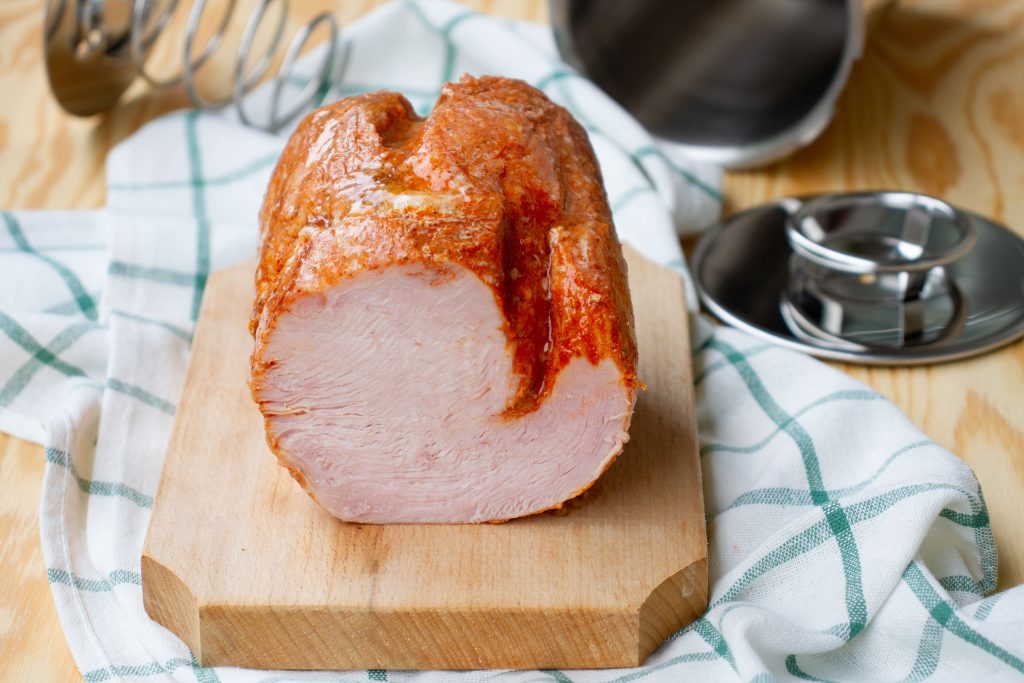