The combination of cheese and red onion always works. I usually mix goat cheese or feta cheese with onion, but this time I have gone for Camembert. For this dish, the onion has to be properly prepared beforehand. It is not enough to peel and dice it, it needs to be cooked as well. So you take the onion, cut it then add brown sugar to it and simmer it together for a few minutes. Only then mix it with the cheese. Sugar is not noticeable in this dish at all, so you do not need to worry about the meat having a sweet taste. I use it only to soften the onion.

The onion and cheese filling is perfect for stuffing chicken breasts. Chicken meat without spices does not have much taste hence adding any extra flavour to it always works. Sometimes salt, pepper and a few spices are enough, and sometimes when you want something special, it’s worth adding a filling.

How to make chicken with Camembert.

Wash the chicken breasts, dry them and flatten them gently with a meat pestle. The thinner they are, the easier it will be to roll them up. However, they should not be too thin as then they will become transparent. Season the meat with salt and pepper, then set it aside for a few minutes.

Meanwhile, cut the red onion into small feathers. Put butter in a frying pan, add onion and sugar. Fry on a low heat for 10 minutes. When finished, let the onion cool down.

Put the fried onion and a few slices of cheese on each of the flattened chicken breasts. Do not put the filling in the middle, but more to the right edge and leave the sides empty. Wrap the meat by folding the empty sides of the meat slightly inwards and then roll it.

Beat the eggs with a fork on one plate, pour breadcrumbs into a second plate and the flour into third one.

Coat the roulades first in the flour, then in the egg bath and finally in the breadcrumbs.

Pour oil into a frying pan and heat it up. Once hot, place the chicken roulades on it. Fry on a medium heat until the roulades are golden brown. Place the fried roulades into an ovenproof dish and cover with a lid. Bake for 20 minutes in an oven preheated to 170 degrees Celsius. Serve the roulades warm with potatoes, lettuce, groats or rice.

Good to know when making chicken roulades with Camembert.

If the roulades are not to stable or you are afraid that they will fall apart during baking, clip the meat with a few toothpicks. I didn’t have such a problem so I didn’t use those.

You can replace Camembert cheese with Brie cheese. 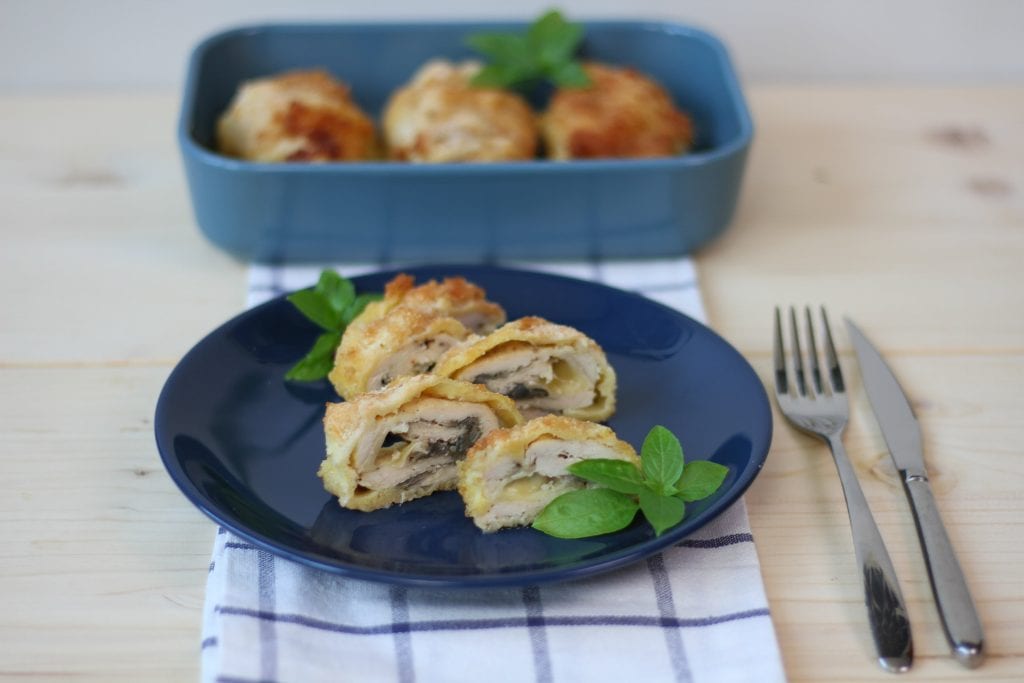