Naan bread is a flat bread made of yeast dough, traditionally baked in a tandoor oven. At home, it can be baked in an oven or on a hot frying pan. The basis of naan dough are simple ingredients such as flour, yoghurt, oil, water, yeast, a little salt and a pinch of sugar. After combining the ingredients, and kneading them for a while, the dough is placed in a warm place to rise. Then, the risen dough is divided into several portions, flat breads are formed, which also have to rise for a while before baking. I bake my naan in a pan with a thick bottom, but it can also possible on a hot stone in the oven.

The baked naan should soft and buttery. I usually brush it with butter immediately after it baking, and I often sprinkle it with chopped parsley or with mashed garlic. I usually serve naan bread for Indian food, I cannot imagine it without naan bread. However, naan bread can also replace other breads and be served, for example, as an addition to soups or baked with cheese and ham. Naan bread tastes best when it is fresh, i.e. right after baking. I encourage you to check the naan bread recipe below. I am sure you will be coming back to it often.

How to make naan bread.

Divide the dough into 6 parts and give them a round or oval shape. Place each piece on a lightly floured countertop and roll it out to a thickness of about 0.5 centimetres. After rolling out, I also stretch the dough gently in my hands, thanks to which it takes on a less regular shape. Place the dough cakes on a floured worktop or on baking paper, cover with a cloth or a piece of baking paper. Set aside for 10-15 minutes to let it rise a little.

Put the non-sticky pan on the heat and warm it up very well, and once it’s hot, reduce the heat to medium and arrange the leavened bread. Bake the bread for about 8 minutes on both sides all together. It should be a bit burned on the outside, at least that’s what I like best. Arrange the bread in a wicker basket and brush it intensively on all sides with liquid butter. Be sure to wrap the basket thoroughly with a kitchen cloth so that the bread does not dry out. Serve the naan bread immediately after baking.

All ingredients used to make bread dough should be at room temperature. You can warm up the yoghurt a little, thanks to which the dough will rise faster.

Do you like homemade bread? If so, try our recipe for Zucchini and cheese bread. 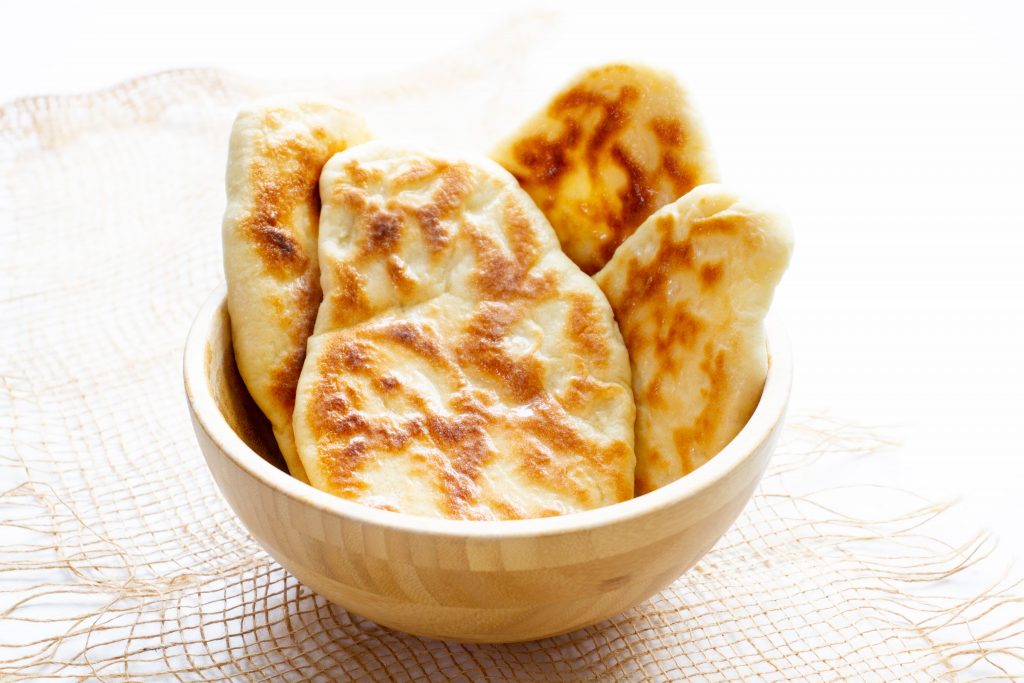