When I prepare a meat dish and want to serve it with something unusual, roulade is always a good choice. Potatoes, rice, grains or pasta can get boring quickly.

When I’m bored of typical garnishes, I look for inspiration. This is what happened this time as well. I made a potato roulade from a dough similar to the one used for gnocchi. I stuffed it with a mixture of spinach and sun-dried tomatoes, then cut it into individual pieces. These little potato and spinach rolls may be easily served with all kinds of meat. You can also have it with a sauce, for example mushroom or spinach sauce.

If you decide to try this recipe, I encourage you to share photos in the Comment section.

Ingredients for potato and spinach rolls.

How to prepare potato and spinach rolls.

Peel the potatoes and cook them in water salted with 1/2 teaspoon of salt. Once they are cooked, slightly cool them down. They should still be warm but not hot. Press the warm potatoes through the masher. Put the mashed potatoes in a bowl and add the flour. Make a dough. Once the dough has uniform consistency, place it on a pastry board. Roll out the dough to a thickness of one centimeter. During rolling, try to make the dough look square.

Heat the olive oil on a low heat. Add the finely chopped onions, then cut the tomatoes into cubes and place them on the oil as well. Fry for two minutes. Then add the minced garlic. Fry for another minute. Add frozen spinach, salt and pepper to the lightly fried ingredients. Continue frying on a low heat for around seven more minutes. Once the stuffing is ready, let it cool down.

Spread the stuffing over the previously rolled out potato dough. Start rolling up the dough. Once rolled, cut them into one-centimetre thick slices. Gently spread each slice with a little olive oil, in which the tomatoes had been marinated. Put the potato and spinach rolls on a baking paper. Bake for forty minutes at 180 degrees Celsius. After twenty minutes, the slices should be turned over. Serve them with meat or with sauce.

Good to know when making potato and spinach rolls.

I used sun-dried tomatoes marinated with olive oil with addition of pumpkin seeds. You can also use plain tomatoes without any additions according to taste.

Do You like spinach? Check our recipe for Sweet potato dumplings 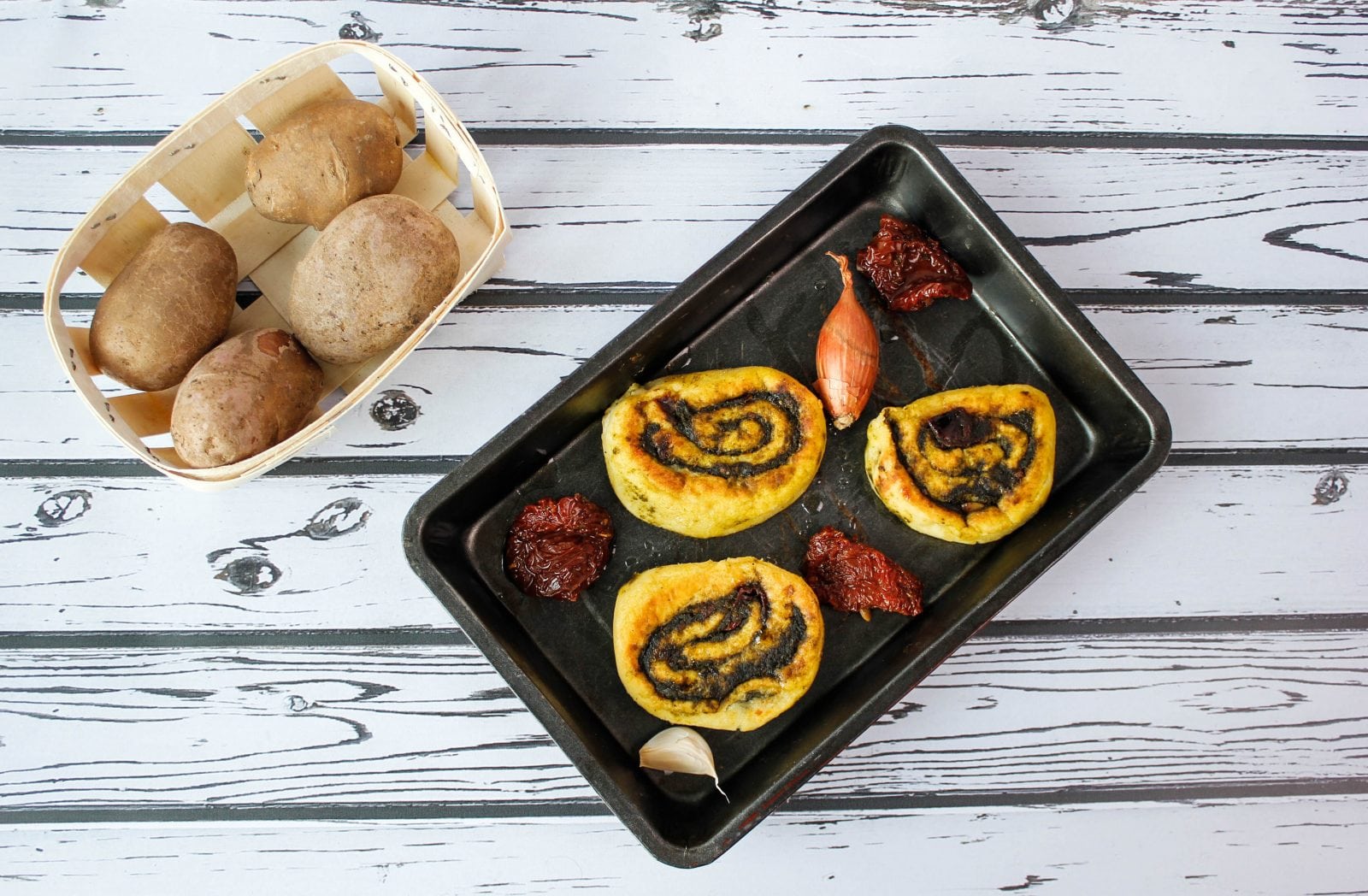