I served these zucchini and Parma ham rolls some time ago for my family on my husband’s birthday. Everyone liked them a lot, and both during and after the birthday, I had many questions about the composition of the rolls and their preparation. The main ingredients of the rolls are fresh zucchini, Parma ham, mascarpone, artichokes and dates. When it comes to the zucchini, I recommend choosing young, medium-sized pieces with a relatively soft skin. I do not peel the zucchini, instead I cut it into very thin strips, brush it lightly with olive oil and grill. After that, I combine it with the other ingredients in the shape of a roll. It is not a must to add artichokes to the cream and use only the cheese itself, but for me, the artichokes give the rolls a unique flavour. Zucchini rolls are the perfect party snack, I often serve them as one of the snacks on a Swedish table. If you have not done this type of rolls yet, I hope you will go for the following recipe for zucchini and Parma ham rolls.

How to make zucchini and Parma ham rolls.

Cut the zucchini into very thin strips by using a vegetable mandolin or a knife, then brush each stripe with olive oil on both sides. Put the grill pan on the heat, warm it up and, when hot, arrange the zucchini strips on it. Grill the zucchini on a medium heat, a few seconds on both sides. Once ready, put them on a plate and let them cool down.

Put the mascarpone and the artichokes drained from the oil into a plastic container. Using a blender, mix into a creamy consistency.

Arrange the zucchini slices on the work counter, place Parma ham on them, cover with artichoke cream and mascarpone cheese. Place a date at the beginning of the short side of each slice, and roll them up. Put the zucchini and Parma ham rolls on a plate and store them the fridge before serving.

Good to know when making zucchini and Parma ham rolls.

It may happen that some zucchini strips become very thin after grilling. In that case, I suggest making a roll from two stripes of zucchini, not one.

I folded the slices of Parma ham in half along the long side and I placed them on the zucchini only after that. The Parma ham and zucchini should have the same width when stacked.

The mascarpone cheese can be replaced with cream cheese. I made these zucchini rolls with both mascarpone and cream cheese, and for me mascarpone works better. After mixing with the artichokes, it has a relatively stiff consistency. Cream cheese mixed with artichokes can be quite runny.

Do you like zucchini? If so, try our recipe for Chocolate and zucchini cake. 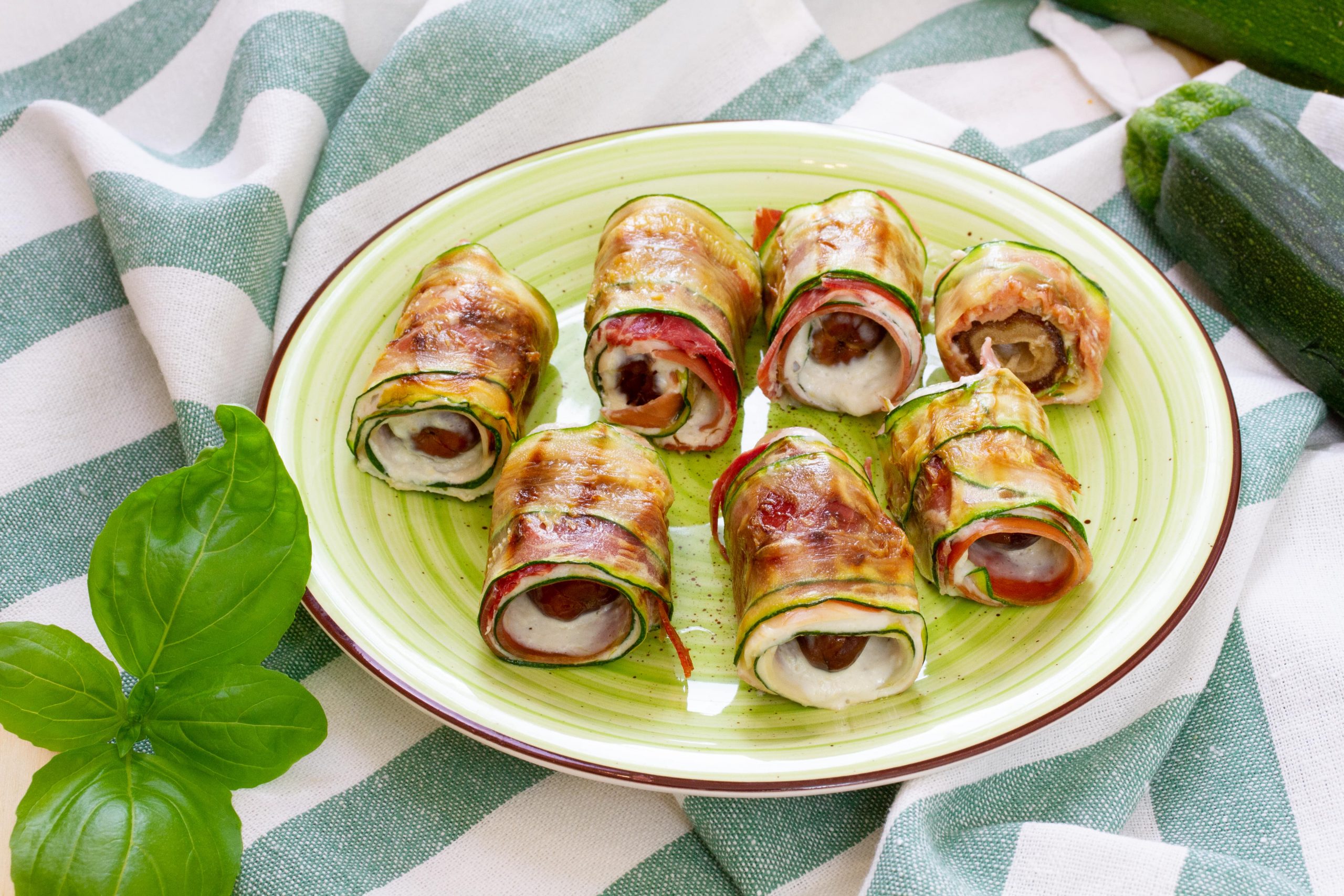