Chinese instant soup salad with chicken, pickled peppers, gherkins and sweetcorn is a delicious cold dish that works great at family celebrations. It can be served on name days, birthdays, communions and many other meetings with friends or family. Christmas is also a good opportunity to serve this salad. Although the name of the salad suggests a Chinese instant soup salad, you only use noodles from such a soup. As you know, in Chinese instant soups, there can be other additives depending on their flavour, such as dried vegetables.

I start the preparation of the Chinese soup salad by pouring boiling water over the noodles and frying the chicken meat. When the noodles and meat are ready, I cool them down and put them in a bowl, and add chopped cucumbers, corn and peppers. The seasoning is mayonnaise and chilli sauce. Thanks to the latter, the salad will be slightly spicy. I recommend you the following recipe for Chinese instant soup salad and I wish you a tasty meal.

Put the noodles from a Chinese instant soup into a bowl, pour boiling water over it and leave it covered for 3-5 minutes. Afterwards, transfer it to a colander and leave to cool down.

Clean the chicken breasts, dry with a paper towel and cut it into medium-sized cubes. Pour the oil into a frying pan, add the chopped meat and fry for a few minutes until the meat is tender. At the end of frying, add herbs de Provence. Cool the fried chicken meat.

Cut the gherkins with the skin into small cubes, and the peppers into strips.

The noodles can be broken into smaller pieces before pouring the boiling water over them, I also do that. The pasta in boiling water can also be kept according to the time indicated on its package.

Do you like salads with pasta? If so, try our recipe for Pasta salad with broccoli. 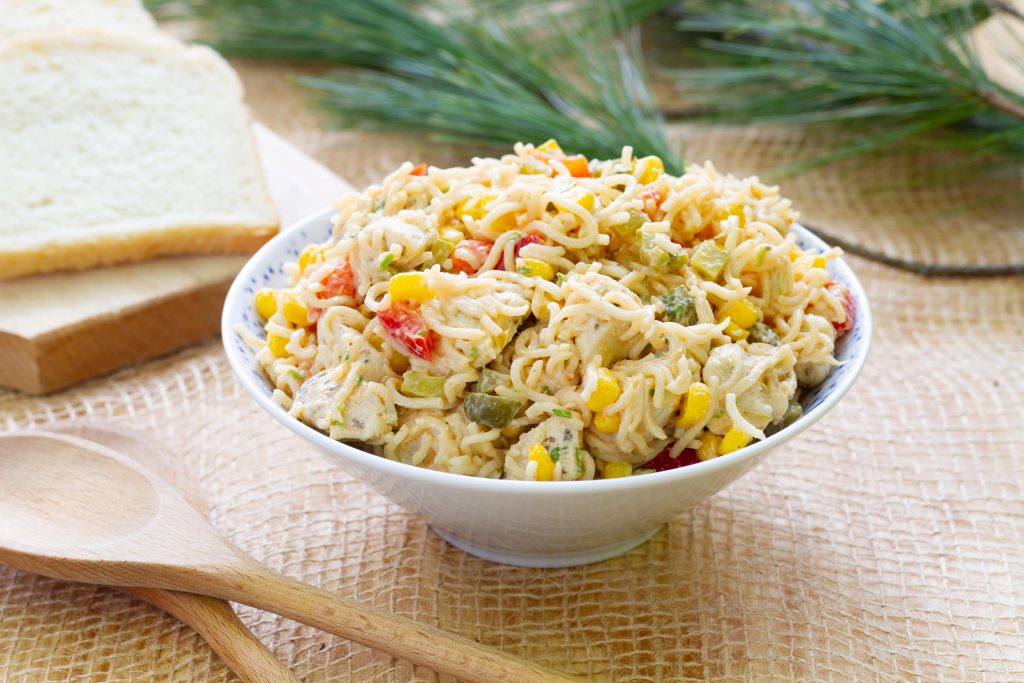