Silesian dumplings are a very popular dish not only in Silesia but also throughout Poland.

The dumplings are made from boiled potatoes and potato flour. The potato-flour mixture is divided into pieces and each piece is shaped into a ball, flattened, then a small hollow is made in its centre with a finger. Apparently, this recess helps the dumplings to cook evenly.

Sometimes, an egg is also added to the potato and flour mixture. I did just that this time. However, I also cook these dumplings quite often from a mixture prepared without egg, i.e. only with potatoes and flour.

Silesian dumplings are a great addition to sauces, which is also how I usually serve them at home.

My husband, who is Hungarian, first tried Silesian dumplings about three years ago. He had never had a chance to eat them before. He liked them so much that when we were choosing dishes for our wedding party in Poland, he asked the venue to prepare Silesian dumplings with sauce 🙂

How to make Silesian dumplings.

How to make dumplings with mushroom sauce.

Dumplings: boil the potatoes in water salted with 1 teaspoon of salt until soft. When soft, pour out the water, let the potatoes cool down a bit and mash them through a potato press while still warm. Add potato flour and an egg, then knead it well. Divide the mixture into several parts and form a long roller from each. Cut the roller into pieces. Shape each piece into a ball, flatten it in your hand and gently make a small hole in the middle with your fingers. The size of the dumplings is up to you. Personally, I think that a diameter of three centimetres is ideal.

Put the cooked dumplings in a colander, pour cold water over them, drain the water and put them in a bowl.

Dissolve the butter in a pot and when melted, pour it over the dumplings.

Mushroom sauce: peel the mushrooms, cut them into slices and put them in a pan. Add butter and fry over a medium heat for 4 to 5 minutes. Pour water, cream into a cup and add potato flour. Mix. Next, pour it over the mushrooms, add salt, pepper and parsley. Bring it to a boil and cook. When the sauce begins to boil, reduce the heat to low and cook for another 5 minutes, stirring occasionally.

Serve the dumplings with the sauce.

Do you like potatoes? If so, try our recipe for Roasted potatoes. 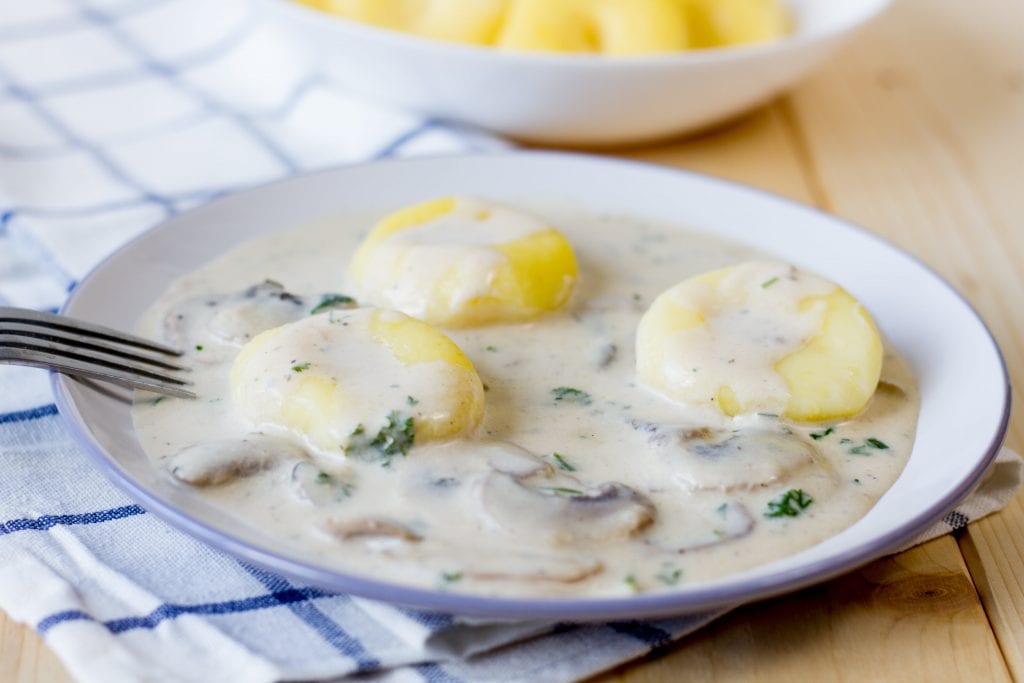