The first fresh home-grown cucumbers are out, so time to prepare a dish with them in the main role.

I always collect lots of cucumbers from my family’s garden. I haven’t pickled any yet this year but soon I will do so. Till then, let’s try a recipe, for which you can use fresh cucumbers.

What I have prepared was a roulade with cucumbers stuffed with cream cheese, to which I added sun-dried tomatoes, egg and a little parsley.

I served the roulade with crunchy toast and everyone loved it.

How to prepare cucumber and ham roulade.

Cut the cucumber across and remove the seeds. Boil the egg and grate it finely. Combine the grated egg with cheese, chopped parsley and finely chopped sun-dried tomatoes. Mix the ingredients together. Stuff each half of the cucumber with cream cheese filling, then put the halves back together. Place the ham on an aluminium foil, slice by slice with the edges overlapping on the next slice, and evenly spread the remaining filling on them. The Parma ham slices put together should be as wide as the length of the vegetable. Place the stuffed cucumber on one end of the Parma ham slices and start rolling it up. Once ready, cool it down in the fridge for at least two hours.

I did not add salt because the Parma ham itself is quite salty.

Parma ham can be replaced with prosciutto ham.

Do You like fresh vegetables? Check our recipe for Healthy vegetable salad 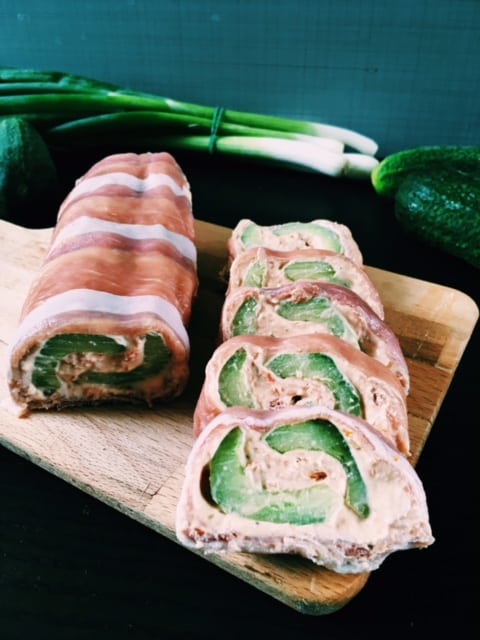