Korean cuisine is characterized by the use of large quantities of rice, seafood, meat and vegetables. Regardless of whether you are talking about fish, vegetable or meat dishes, they are often seasoned with soy sauce, gochujang paste, chili flakes, i.e. gochugar, garlic and ginger. For example, many of the above-mentioned spices can be found in one of the most popular Korean dishes, which is kimchi i.e. fermented cabbage. However, ribs are an equally popular dish where spices such as soy sauce, garlic, ginger and chili are great. Korean style ribs are a delicious meat dish that can be served as a snack at special events or as a dinner dish.

I start preparing the ribs in Korean style by preparing the marinade. It is a marinade that can also be used as a sauce, for example with seafood or tofu. Put the marinade ingredients in a pot, mix it, then cook them for a while to thicken it a bit. I cool down the cooked marinade, spread the ribs with it, then put it all in the fridge for a few hours to marinate. When the ribs are marinated, I bake them on a low temperature for about two hours. I serve the baked ribs sprinkled with green onions and sesame seeds. I recommend you the following recipe for Korean style ribs and I hope you will like them.

How to make Korean style ribs.

Put all the marinade ingredients into a pot, bring them to a boil, then, while stirring constantly, simmer over a medium-high heat for 2 minutes. Let the marinade cool down. With cold marinade, rub each pork rib very thoroughly, put them in a bowl, cover it, then refrigerate for 6 hours, preferably overnight.

After removing from the refrigerator, place the marinated ribs in an ovenproof dish, cover and place it in the oven preheated to 160 degrees Celsius. Bake until the ribs are tender and the meat comes off the bones – it took me 2 hours. Serve the baked ribs hot or warm, sprinkled with sesame seeds and finely chopped onion.

The baked ribs can be served sprinkled with white sesame instead of black.

Meaty ribs, those whose bones are covered with a large amount of meat, work best in this recipe.

Before adding the ginger to the marinade, I grated it on a fine grater and mashed the garlic through a garlic press.

What to serve Korean style ribs with? A nice addition will be a vegetable salad or a vegetable slaw. Additions such as coleslaw, cabbage salad with garlic sauce and corn salad are perfect here. Other options include mashed potatoes or French fries.

Do you like dishes with ribs? If so, try our recipe for Caramelized pork ribs. 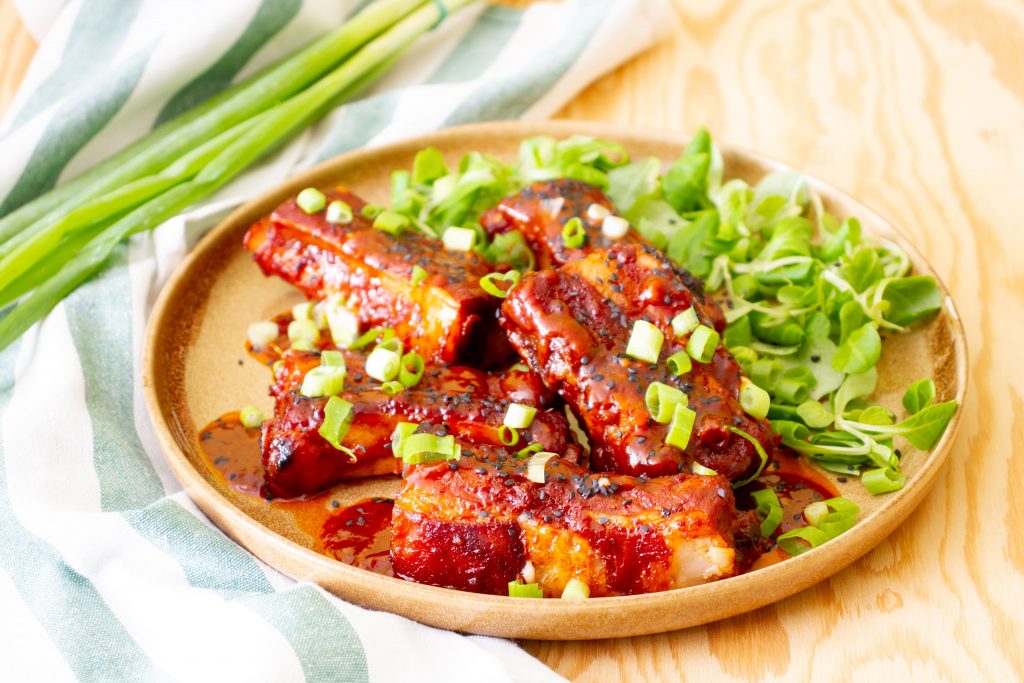