Spanish donuts, also known as “nests” or “Viennese donuts”, are light and fluffy donuts made from choux pastry. Choux pastry is a pastry made by cooking flour in boiling water and grease. The whole thing is cooked for a few minutes on the heat, then the pastry is cooled down and eggs are added to it.

I think that most of you have made or tasted choux pastry at least once in our lives before, because it is the basis of cream puff, Carpathian cake and éclairs. In today’s recipe, choux pastry is also the basis of Spanish donuts. These donuts are deep-fried, and when cooled down, decorated with orange icing. Fat Thursday is right on our doorstep and if you are wondering what kind of donuts to prepare for this occasion, I recommend the following recipe for Spanish donuts.

How to make Spanish donuts.

Pour water and milk into a pot, add butter, salt and sugar and bring it to a boil. When the ingredients in the pot start boiling, take the pot off the heat and add the sifted flour while stirring vigorously. Put the pot back on the heat, stirring constantly with a wooden spoon, cook the pastry on a low heat for about 2 minutes. You should obtain a uniform, delicate pastry, freely protruding from the sides of the pot. Allow the pastry to cool down.

Next, add one egg at a time to the cold pastry, mixing the pastry preferably with an electric mixer. Put the prepared pastry into a confectionery sleeve with a nozzle at its end. Place a baking paper on the kitchen counter, then use a pencil to draw circles on it, by using a glass or any other round-shaped object. There should be some space between the circles, because after squeezing the pastry on the paper in the circles, the donuts should not stick together. Then, turn the paper over and start pressing the pastry along the lines of the circles, without filling the middle areas. Once the donuts are on the paper, use scissors to cut the paper so that each donut is on a separate piece of paper.

Pour the oil into a fairly wide dish, heat it up and when hot, put the Spanish donuts on it. Pick up the donuts with the paper under them, and place them on the oil with the donut facing the oil. After a few seconds, use tongs to remove the paper and fry the donuts over a medium heat, until golden brown on both sides. Put the fried donuts on a plate lined with a paper towel.

Pour sifted icing sugar into a bowl, add orange juice and rub for 10 minutes. I prepare my icing with a food processor.

Drizzle the cooled Spanish donuts with the orange icing.

You can make about 26 donuts from the given amount of ingredients. The number of donuts might vary depending on the size of the circles squeezed out of the choux pastry. The circles I made were 5.5 centimetres in diameter.

You can replace the orange juice with lemon juice or lime juice.

There should be quite a lot of oil in which the donuts are frying. I used 1 liter of oil for a fairly low but wide pot. 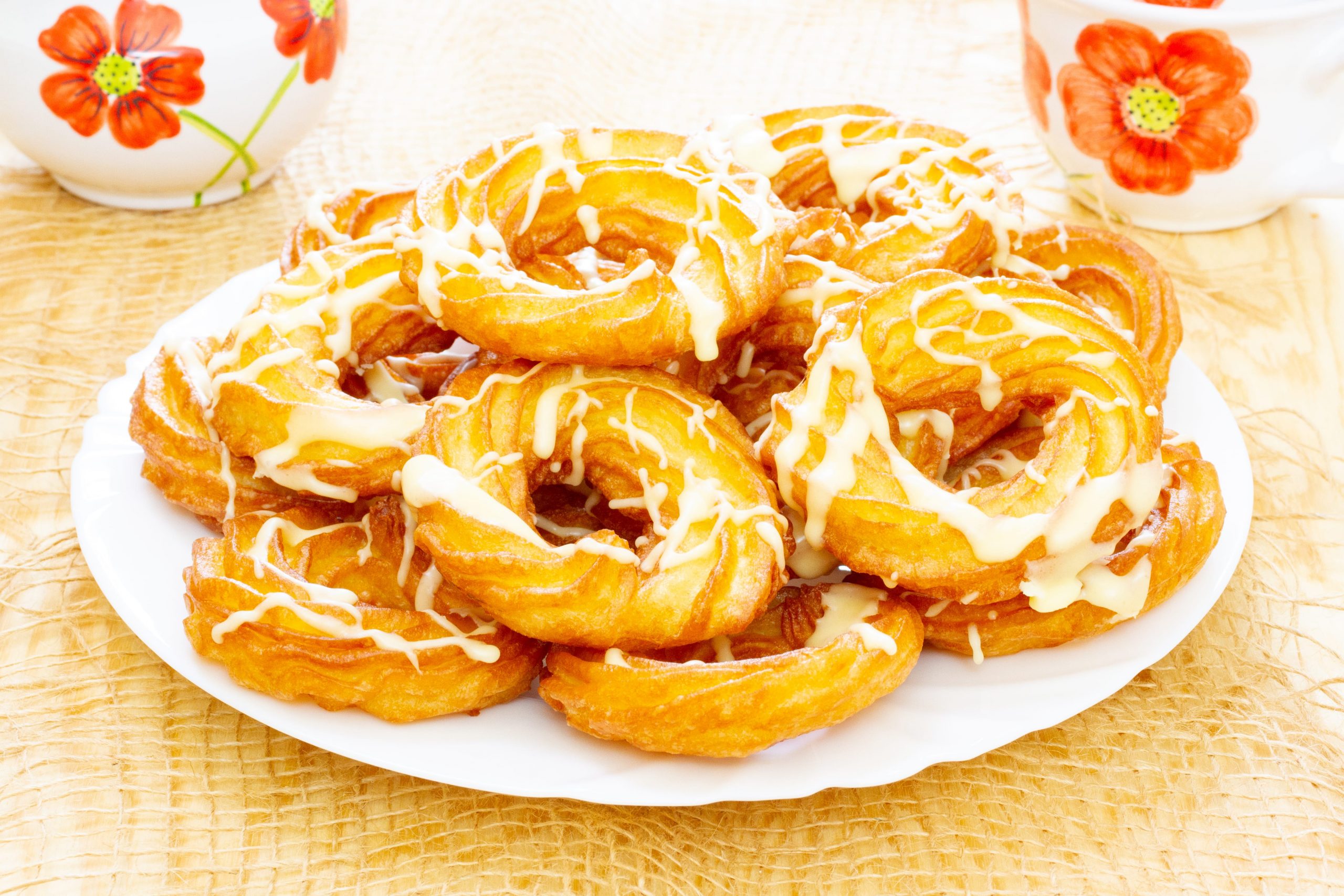