Shortbread cake with cream and figs is a sweet pastry for the weekend that I’ve made recently. I had received a lot of figs from my family and they can’t go to waste. I am also planning to prepare fig jam from them, and of course I will eat some of them fresh. On the blog, you will find several recipes for dishes using figs, such as oatmeal with figs, gluten-free bars with figs, quinoa and figs salad, Greek yoghurt with figs and pomegranate and many more.

The recipe for shortbread cake with cream and figs, which you can find below, is for those who like combining cocoa cake with diplomat cream and fruit. Starting with the crust, I prepared a shortbread cocoa crust from flour, sugar, butter, cocoa and eggs. After kneading, I chilled the pastry in the fridge, rolled it out thinly and baked it. For 15 minutes, I baked it with pie weights to prevent the pastry from puffing up too much. After removing the weights, which in my case were bean grains, I continued baking the pastry for another 20 minutes. I cooled down the baked pastry, then filled it with diplomat cream and fresh figs.

In its classic version, a diplomat cream is a combination of two creams. The first one is custard cream, most often having vanilla flavour, while the second is whipped cream with the addition of gelatine. In my case, the custard cream had a cinnamon flavour, because cinnamon and figs are a perfect combination. Of course, when you prepare diplomat cream in this way, you can use not only in this cake, but it is also perfect for filling all kinds of tarts, muffins, cupcakes, puffs and many other sweet pastries.

This shortbread cake will appeal to all those who like cakes with cream and fruit. My family will surely eat it in the coming weekend.

Shortbread cake with cream and figs.

How to make shortbread cake with cream and figs.

Sift icing sugar, flour, a pinch of salt and cocoa into a bowl. Add cold butter diced into small cubes, and start combining the ingredients. I prepared the pastry dough with a food processor, but it can also be prepared on a pastry board. If you are making the dough on a pastry board, the ingredients should be chopped with a knife until they start to merge. When the ingredients are coming together, add the egg and the egg yolk and knead the dough. Wrap the finished pastry dough with cling film and refrigerate it for an hour.

Afterwards, remove the pastry from the refrigerator, roll it out thinly and cover the bottom and sides of the baking tray with it. In several places, prick the dough with a fork, cover it with baking paper, and lay pie weights or grains (e.g. peas) on it. Put the pastry in an oven preheated to 190 degrees Celsius for 15 minutes. After that, carefully remove the pastry from the oven, remove the paper and grains and put the baking tray back in the oven for another 15-20 minutes, depending on your oven. Remove the baked pastry out of the oven and let it cool down.

Cinnamon custard cream: pour the milk into a cooking pot and bring it to a boil. In the meantime, pour crystal sugar, a pinch of salt, cinnamon, potato flour and egg yolks to the bowl. Stir with a spoon or a hand whisk, then slowly pour half of the boiled milk from the pot, stirring constantly. Next, quickly transfer the mass from the bowl into the remaining milk in the pot, place it on a medium heat and, stirring constantly, cook for about a minute. After that time, reduce the heat to low and continue cooking for about 2 minutes. Remove the cooked custard from heat, add soft butter, mix quickly then cover with cling film and set it aside to cool. The cling film that you cover the custard with should be placed directly on it. That will will prevent the top of the custard from thickening. Cool the custard in the fridge for at least 6 hours, preferably overnight.

Chantilly cream: pour gelatine into a bowl, add 30 ml of water and mix. Set aside for 10 minutes, then heat up, but do not boil. Let it cool down for a while, then add 30 ml of whipping cream and mix quickly. Whisk 250 ml of cold whipping cream semi-stiff, add the icing sugar and whisk together for a few seconds. Subsequently, pour in the cream with gelatine and continue whisking for another few seconds.

Put the cold cinnamon custard into a bowl and rub it. When the cream is quite fluffy, quickly add the whipped heavy cream and combine it together with a mixer or a wooden spoon. Put the cream on the cake right away.

Assembling of the cake.

Cover the cocoa shortbread cake with the diplomat cream, and after that, put it in the fridge for 30 minutes. After removing it from the refrigerator, decorate with the chopped figs and sprinkle it with the cinnamon and icing sugar mix. Wrap the cake thoroughly with cling film, aluminium foil or place it in a tightly closed container and refrigerate for at least 5-6 hours, preferably overnight.

Good to know when making shortbread cake with cream and figs.

Before placing the figs on the cake, wash, dry and cut them into slices, quarters or large cubes. How you slice the figs depends on their size and their softness.

The diplomat cream should be placed on the cake immediately after its preparation, otherwise it may thicken too much, making it more difficult to distribute it evenly. In general the consistency of this cream is quite loose – it is thick but not stiff.

I always line the baking tray in which I bake the cocoa cake with baking paper. I baked this cake in a baking tray measuring 21 by 30 centimetres.

Do you like dishes with figs? If so, try our recipe for Gluten-free pizza with figs and Parma ham. 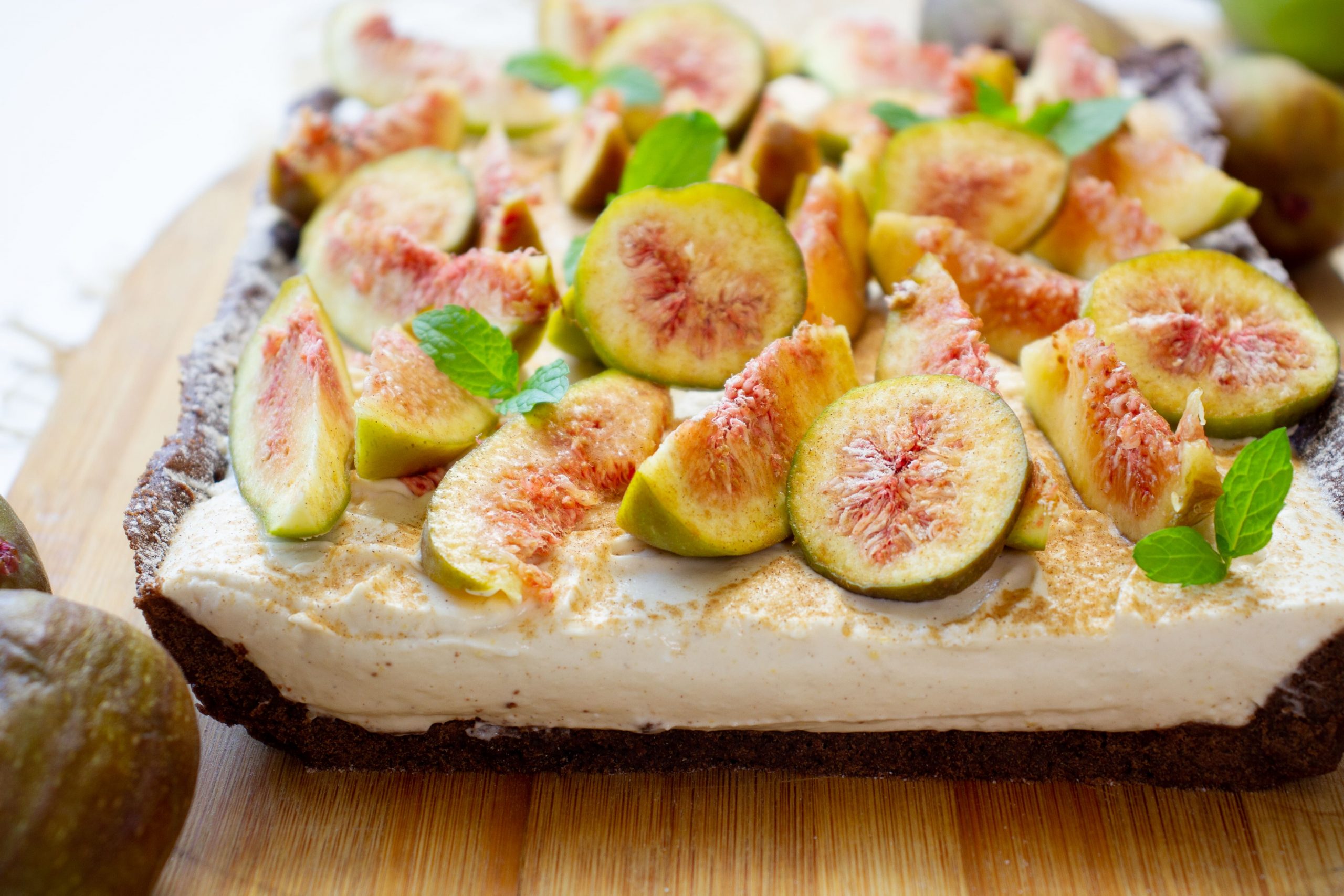