Poppy seeds star is a sweet yeast cake that cannot be missed on the festive table. In fact, Christmas is the only time when this poppy star can be served. Its preparation is not difficult, and the end result is visually and tastefully satisfying.

How to make poppy seeds star.

Put the yeast in a cup, add lukewarm milk, mix and set it aside for 10 minutes. Sift the flour into a large bowl, add the risen yeast, icing sugar, egg, egg yolk, vanilla and a pinch of salt. Knead for a minute, then add the melted butter and continue kneading for 8 minutes. Cover the bowl with the yeast dough with a kitchen cloth and set it aside in a warm place for about an hour for the dough to rise, during which, the dough should double its size. Place the risen dough on a lightly floured surface, divide into two parts and form each into a ball. Roll out both dough balls thinly, so that there are two circles with a diameter of 30 centimetres formed from each.

Mix the poppy seed filling with the egg. On a round-shaped baking tray, lined with baking paper, place the first cake of yeast dough, on which carefully spread the poppy seed filling. Then, cover with the second yeast cake. Place a glass with a diameter of 6 centimetres in the center of the dough, then cut the dough around the glass into 16 pieces. Starting with the first of the pieces, grab it in your hand and turn 4 times to the right, the next piece turn 4 times to the left. Repeat this step until each piece of dough is twisted.

Remove the glass from the dough and cut that area of the dough with a knife in several places. Cover the poppy seed star with a cloth and set aside for 25 minutes to let the dough rise. Brush the risen dough with an egg white, then put it in the oven preheated to 180 degrees Celsius for 35-40 minutes. Cool down the baked poppy seeds star.

Put sifted icing sugar into a bowl, add hot water and mix together for 10 minutes. Spread the finished icing over the cold poppy seeds star. On the top, the star can be decorated with candied orange peel.

All the ingredients used to prepare the yeast dough should be at room temperature.

I filled the star with home-made poppy seed filling, for which you can find the recipe on the blog.

On my Instagram you will find step by step photos where you can see how I formed the dough into a star shape.

Do you like cakes with poppy seeds? If so, try our recipe for Poppy roll. 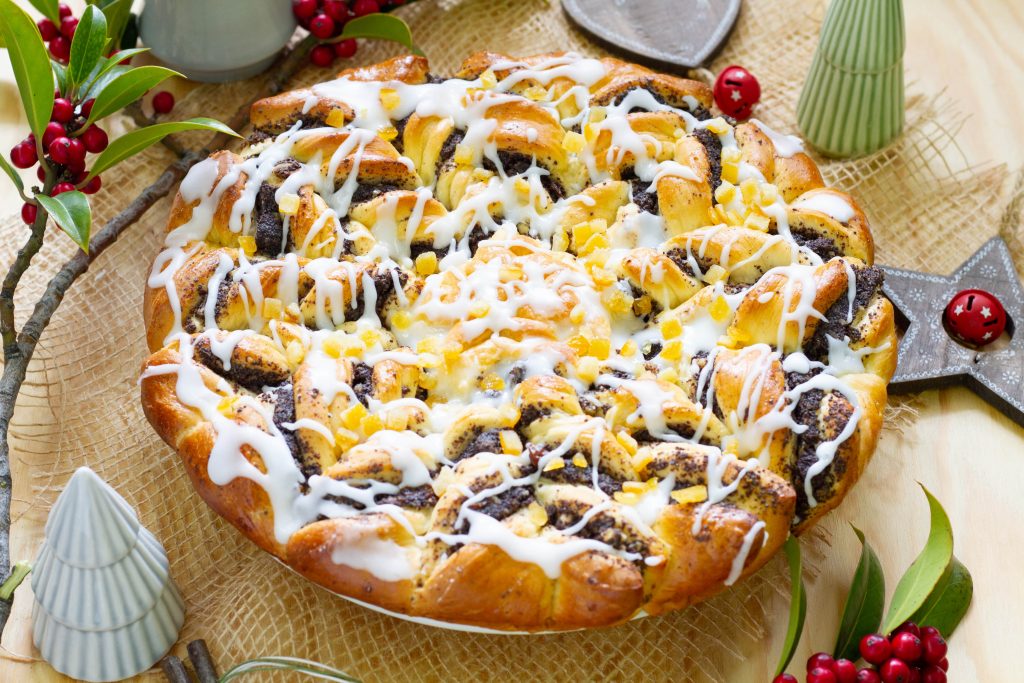