Angel wings i.e. Faworki are sweet and crispy little bows made from flour, egg yolks and vinegar. These faworki are almost always served in Polish homes for Fat Thursday. I am making these every year as I find them quicker and easier than donuts.

Most people in Poland associate Fat Thursday mainly with donuts but there are many other sweet goods that are also typical of that day. Apart from the already mentioned faworki, cheese rings and carnival roses are other very popular desserts.

How to make Angel wings.

Put the finished dough onto a pastry board and roll it out to a thickness of approximately 5 millimetres. Fold the rolled out dough a few times and roll it out again. Repeat the same steps about 6 times in total. After the last folding and rolling, wrap the dough in cling film and place it in the fridge for an hour.

Once removed from the fridge, roll out the faworki dough very thinly to a thickness of 3 millimetres (maximum). Cut rectangular strips from the dough – mine were 7-8 centimetres long and about 2-3 centimetres wide. Make a 2 cm long cut in the center of each rectangle lengthwise, then fold one end of the rectangle towards the incision, pull it through it. Afterwards, stretch it by holding the two ends (the one intact and the one, which you’ve just pulled through) and pulling them.

Heat the oil in a pot and once hot, put in the faworki. Fry over a medium heat until golden brown on both sides.

Put the fried faworki on a paper towel to allow the excess oil to be drained. Sprinkle the faworki with icing sugar.

I used 20% vinegar. You can replace the vinegar with spirit alcohol.

The length, width and thickness of the faworki depends on you. Make thicker or fatter ones, whatever you like best 🙂 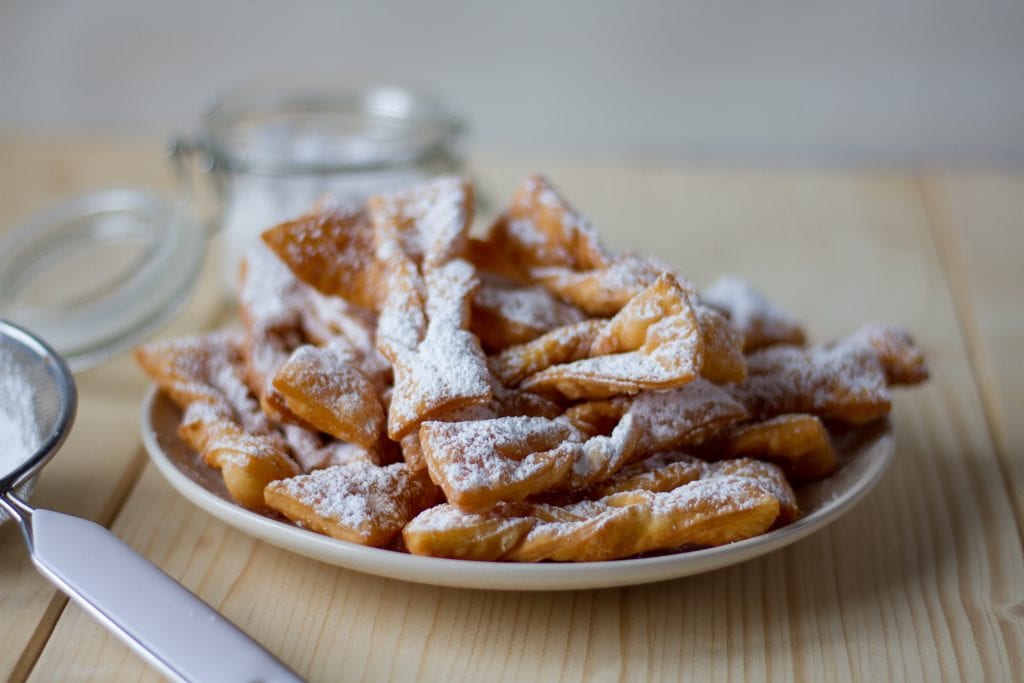