Coconut macaroons are gluten-free cookies made from egg whites, sugar and shredded coconut. These cookies are easy to prepare and do not take much time. I usually make coconut macaroons when I have some egg whites remaining after preparing custard cream, baking donuts or making a shortcrust pastry. After taking them out of the egg shell, egg whites can be kept in the refrigerator for a few days. It is important to keep them in a tightly closed bowl, otherwise they may absorb the smell of the fridge.

The consistency of baked coconut macaroons is up to you. They can be light or a bit more compact, it’s all a matter of how much shredded coconut is added to the egg white base. If you want to make lighter coconut macaroons that can be squeezed onto a baking tray with a baking pipe, then only add a small amount of coconut. It is worth pouring in the shredded coconut gradually, mixing with a spoon and checking regularly whether the consistency of the egg white-coconut mixture is not too loose but at the same time stiff enough to be squeezed out through a baking pipe.

The recipe for coconut macaroons, which I am sharing with you below, is for those with quite a lot of shredded coconut, so it makes them a bit heavier. The mixture should be scooped up with a spoon and shaped into balls by hand.

How to make coconut macaroons.

Dissolve the butter, mix it with shredded coconut, then set aside to cool it down.

Put egg whites into a bowl, add a pinch of salt and whisk until stiff peaks are formed. At that point, start adding sugar, not all at once, but in smaller batches, whisking constantly. After adding the sugar, it’s time to add the coconut previously mixed with the butter. First, mix in only a part of the coconut mixture, combine it with whipped egg whites as quickly as possible, then add the remaining amount.

Take some of the coconut mass with a spoon, put it on your hand and shape it into a ball. Place each ball on a baking tin lined with baking paper. Preheat an oven to 170 degrees Celsius and once it’s hot, put in the coconut macaroons. Bake for 22-25 minutes.

After removing the egg whites from the refrigerator, let them come to room temperature. Such egg whites will will foam better and will be easier to whisk.

Do you like desserts with coconut? If so, try our recipe for Bundt cake with cherries. 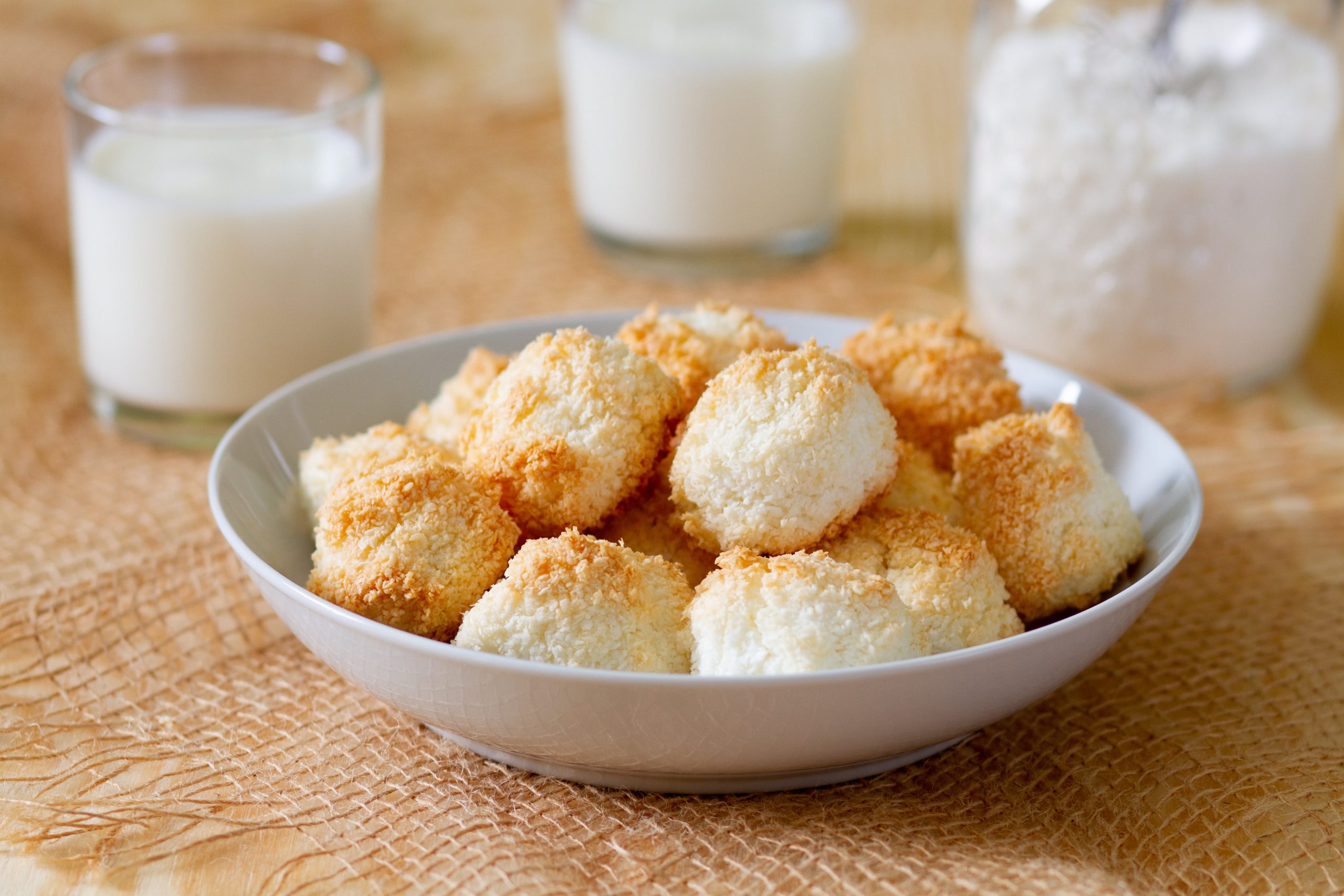 Strawberry 🍓 bar cake 🍰 with strawberry and