Churro is a type of fried dough that is very popular in Spain and also in many other countries. Churros dough is a so-called choux dough, which is made by steaming flour in water with the addition of fat. It is cooked for a few minutes, then eggs are added to it. Subsequently, the dough is pressed either directly into hot oil or onto a baking paper. I am a supporter of the latter method, which is squeezing the dough onto a baking paper first and then putting it all in oil. After frying, the churros are sprinkled with sugar with cinnamon and served with hot chocolate. I had the opportunity to eat my first ever churros a few years ago in Madrid, in Chocolatería San Ginés. It was served with phenomenal hot chocolate and tasted great. If you haven’t done churros so far, Fat Thursday may be a good opportunity for you to do so. I recommend you the churros recipe below and I hope you will enjoy it.

How to make churros.

Pour water, butter, salt, sugar and vanilla into a pot. Bring it to a boil, then remove the pot from the heat and vigorously stir in the sifted flour. Stir for a while until there are no lumps in the dough, then put the pot back on the heat. Simmer for 2 minutes, while stirring constantly. Remove the pot from the heat and let the dough cool down. Then add the eggs to it, one at a time, preferably mixing with an electric mixer. Put the finished dough into a confectionery sleeve with a nozzle at its end.

Place baking paper on the kitchen worktop and squeeze out 15 centimetres long churros on it. It is a good idea to keep at least 3 cm spacing between each churro. Next, cut the paper so that there are about 3 churros on one piece of paper.

Pour the oil into a wide pan, heat it up, and when hot, add the churros. Fry over a medium heat until golden brown on each side. Put the fried churros on a plate lined with paper towel.

Combine brown sugar and cinnamon, then sprinkle the churros with it. Serve the churros immediately after frying, with addition of chocolate sauce or hot chocolate.

Good to know when making churros.

I squeezed the churros with a nozzle with a rather small hole. It is best to test several nozzles of different sizes to see which one gives you the best result. It should be remembered that after putting the churros in oil, the dough rises a lot.

There should be quite a lot of oil in the pot so that each churro can swim freely in it.

Do you like dessert made from choux pastry? If so, try our recipe for Spanish donuts. 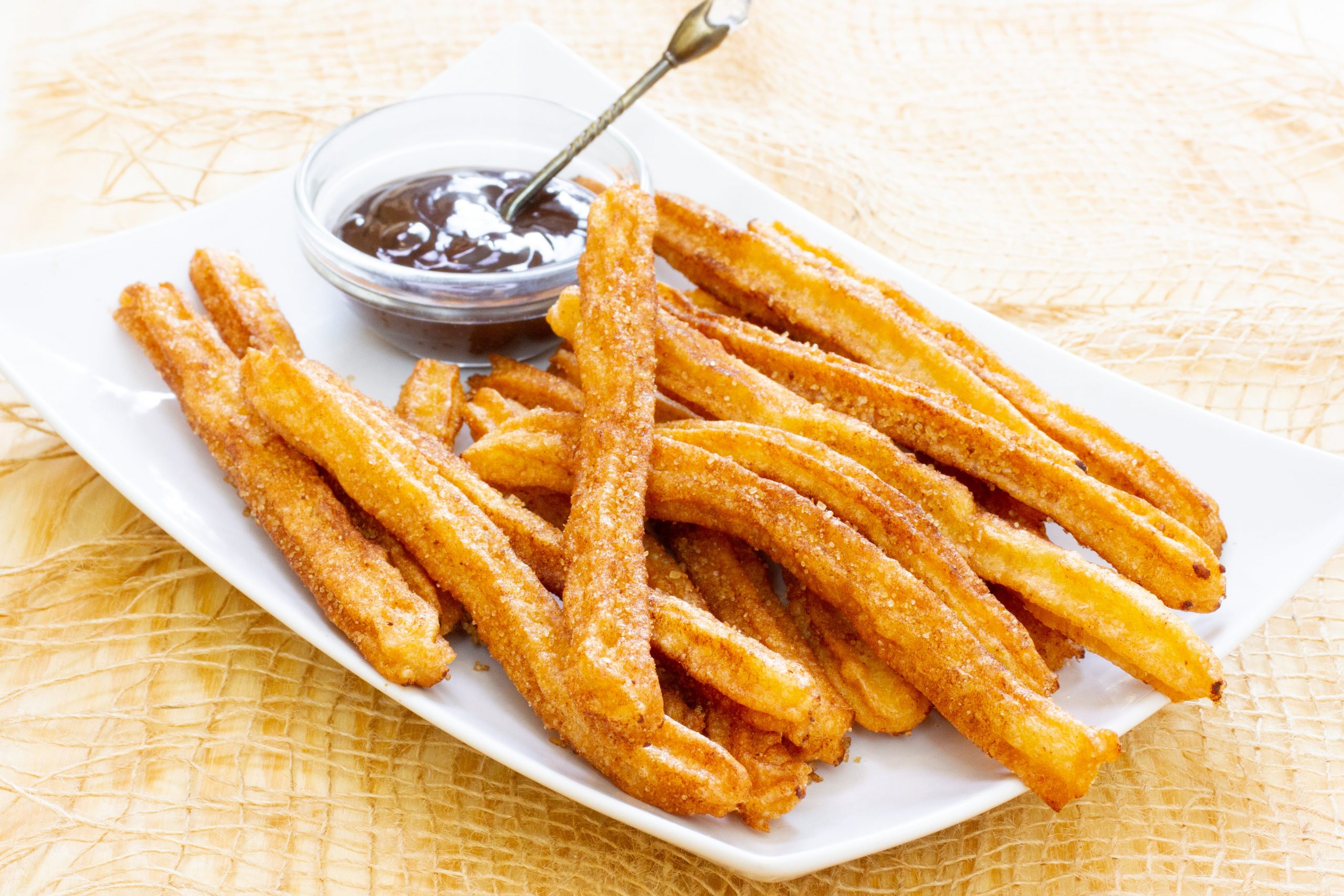